On her sophomore release, Seattle jazz singer Jenny Davis brings out something we just don’t hear anymore. In this era, female jazz vocalists tend toward a particular type of repertoire: generally the American songbook, usually one or two pieces from the Brazilian samba library, and maybe, just maybe, a piece from Duke Ellington and Billy Strayhorn. Davis presents something else. She has a couple of the songbook pieces in her set (and indeed, even a Jobim piece and a couple of Duke numbers), but there’s a fair amount of other material here: some Bird, some Oscar Brown, some Clifford Brown, too, as well as a lone original. The repertoire itself is enough to make the album worth picking up — you’re not going to hear a lot of soul-jazz presented in a light vocal format — even Lambert, Hendricks & Ross stopped with bop. That said, though, there’s a reason you won’t hear vocal versions of Clifford Brown — his horn had more of a range than most singers can deal with. Davis deals with this difficulty by small rearrangements and the result isn’t too bad. When left to her own devices, she heads into a scat from time to time that’s perhaps a bit overblown for the songs she sings, but as long as she has the basic line of lyrics to follow and doesn’t stretch herself too far, she keeps the songs in a nice place. The album probably isn’t the best vocal set ever produced, but it does have a sweet sound to it, and might be one of the more adventurous vocal jazz sets in recent times. 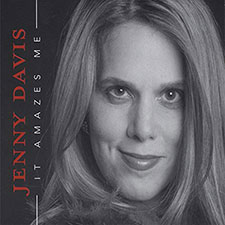